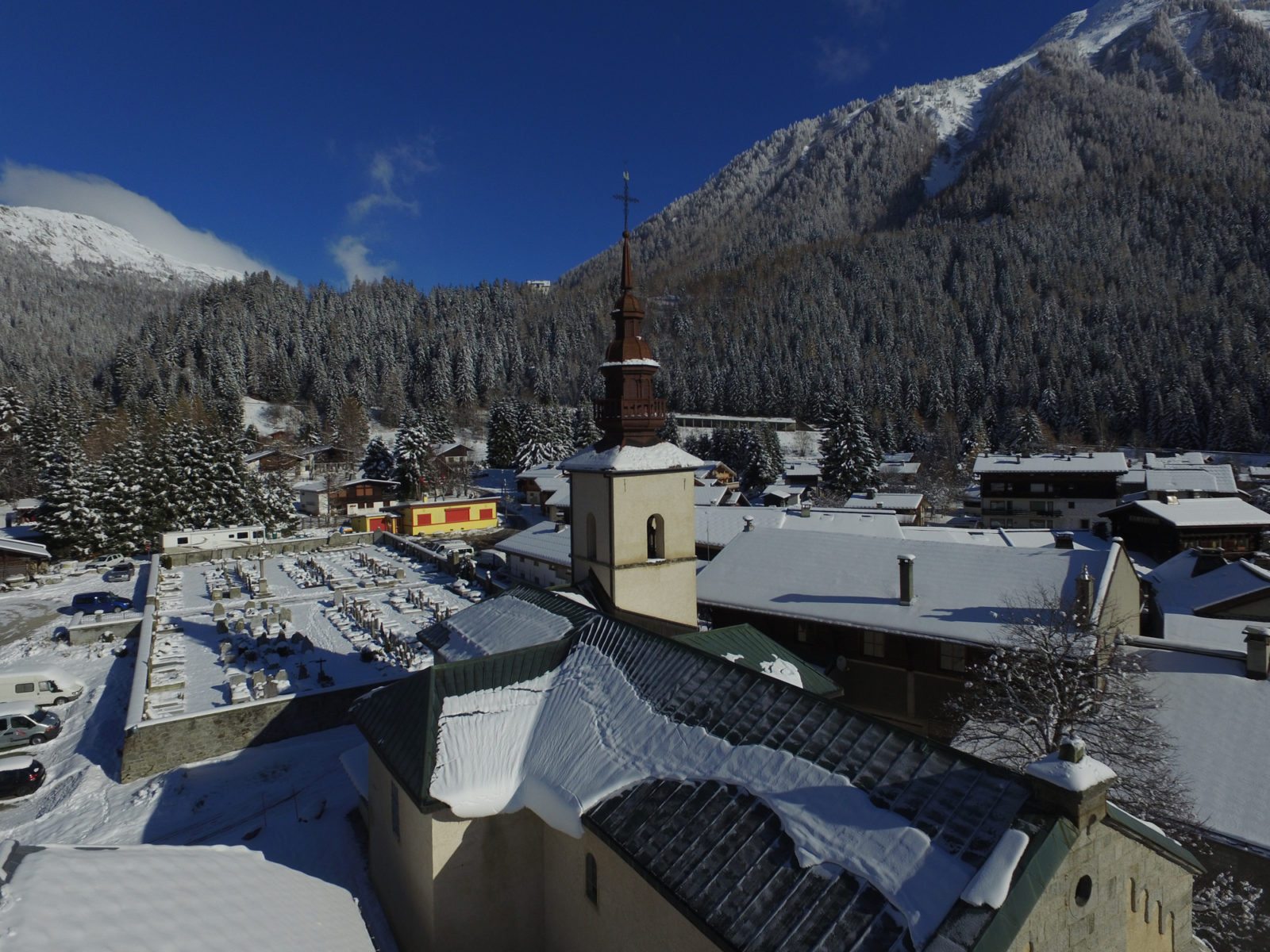 It’s little wonder many of our clients have huge smiles on their faces during their Geneva to Argentière transfer. They know that within 90 minutes of the airport, they have some of the best skiing in Europe on their doorstep. Yep, it’s pretty superlative stuff during the winter season at the Grand Montets ski area in Argentière.

Your transfer journey with Mountain Drop-offs sees you going through Chamonix and then heading up the incline to Argentière. And of course, we also carry on to Montroc and Le Tour, the outlying villages of Argentiere. Often the snow line is just at the entrance to Argentière village, so don’t be surprised if it’s raining when you board your transfer bus at Geneva Airport and snowing big pizza flakes on arrival in Argentière!

Home to the world-famous Les Grands Montets ski area, Argentière is the beating heart of the Chamonix Valley.

The historic old village of Argentière

The village of Argentière is made up of the main drag with all the commerces, the very quaint old part behind and, just on the other side of the river, the legend that is the Grands Montets ski area.

The village itself is well worth a wander around, especially the distinctive baroque church (complete with golden tabernacle brought all the way from Venice over the Col du Grand Saint Bernard in the 18th century!). Don’t miss the little wooden Protestant chapel and the gentle trails around the forest that are the cross country ski tracks in winter.

The best of the skiing

But back to the main attraction – Les Grands Montets. Sitting 8km further up the valley from Chamonix at 1250m, means that Argentière is just that little bit closer to the sky, so snowfall is good. And with north-facing slopes, the ski season can run from late November to early May at Les Grands Montets.

Make no mistake though, there’s no easy cruising here. And yes, when you look at the piste map there are very few lifts, but they do give you access to wealth of off-piste terrain, which is what this ski area is all about.

Mini skiers aren’t completely forgotten though. There’s the high-altitude beginner’s area adjacent to the main Marmottons piste, served by two drag lifts. Evolution 2 ski school has the ‘Panda Club’ and there’s the Piou Piou ‘Jardin de Neige’ run by ESF Argentiere both at the foot of the main bubble lift.

A short transfer by car, bus or even on foot brings you to Les Chosalets, a hidden gem adjacent to Les Grands Montets with a handful of drag lifts making it ideals for families and beginners of all ages – and it’s in the sun!

Glacier skiing from the summit of Les Grands Montets

If you have a Mont Blanc Unlimited lift pass (the more expensive one that gives you access to everything in the valley), make sure you head up on the ‘top’ cable car to ‘Les Grands Montets’ summit. Be aware that although there are two black pistes up here, they are un-pisted and traverse glacial terrain, so you need to be a confident skier to come back down on the snow.

You can always take the lift back down after taking in the thinner air and the spectacular views of the glacier and the Aiguille Verte peak at 4122m right in front of you. There’s even a little cafe perched up there too for a warming hot choc or something stronger! (Please note that following the fire at Lognan, no cable cars will be running this winter. Access to Les Grands Montets is by the main Plan Joran bubble lift – Ed.)

For more info on the best skiing in GM for good skiers, see our Ski Guide below!

Le Tour – the gem at the end of the valley

And, of course, don’t forget Le Tour/Balme ski area. Go beyond Argentière, past the village of Montroc and you arrive at Le Tour village, where the main bubble lift for this ski area goes from. There’s also a hidden gem for novice skiers – La Vormaine. Cruisey sunny slopes served by four drag lifts, one of which is free. You can buy a lift pass just for La Vormaine at the cash desks next to the lifts. Just walk behind the Olympique restaurant next the main Le Tour bubble lift and there you are!

You can also access Le Tour /Balme ski area directly from Vallorcine, the ‘lost’ village they call Narnia, which is on the other side of the col des Montets mountain road!

As we said, those lucky enough to have booked their Geneva Airport transfer straight to Argentière will be the first ones on the slopes of Grand Montets for lift opening o’clock. Here’s our little list of favourite off-piste ski spots for those aching to ride the powder. Remember, off piste is dangerous so get equipped and stay safe people!

– Tabé gullies – ideal for a first little foray into perfecting those powder turns and you can do a recce as you take the lift up. Short but often very sweet

– The ‘magic’ or ‘dream’ forest – where the powder hounds go on a bad vis day, using Retour Pendant to bring you back up, so make sure the lift is open before you go

– Triangle de la Herse – accessed either by cutting under the lift line at the top of Bochard, or tracking off to skier’s right after the first big left hand bend of the Bochard piste. This whole area is paradise after a good snowfall and brings you out onto the track back to Lognan, or you can continue down onto the home run Pierre a Ric

– Combe de la Pendant – heading skier’s left after the first ridge of the Bochard piste brings you into the big, wide expanse of a bowl. It gets tracked out really quickly, but can be a true delight. The gnarlier skiers head down all the way to Lavancher village, but you really need to know where you’re going for this as there are lots of rock faces and couloirs

Ski tourers will love the likes of the Col du Passon across the Argentiere glacier and up, the Tour Noir and the Chardonnet, to name but three of the possible routes.

For seriously extreme skiing, there’s the likes of the Pas de Chèvre and the Rectiligne Couloir from the top of Grands Montets (which bring you out at the Mer de Glace, so you’ll need to transfer back to Argentière if you’ve parked your car at Grands Montets!). These involve rappels and steep gullies, so a guide is a must.

Much of what goes on in Argentière during the winter season revolves around the sensational skiing at Les Grands Montets, the ski area that is the jewel in the crown of this village. Having said that, there are other slightly less gnarly sporting and non-sporting events in and around the resort that are great fun to take part in or watch.

Argentière is THE place in the Chamonix valley for the keenest of skiers to stay. You can walk over to the lifts pretty quickly from anywhere in the village (and the same goes for anyone staying in neighbouring Le Tour for the Balme area), so when it’s going to be one of those prized bluebird powder days you can make sure you’re there first.

There’s also just enough in the way of bars, restaurants and shops in Argentiere to keep you fed, watered and entertained during your stay. And of course, carriage of your brand spanking new pair of big, fat, off-piste, full-rocker skis is included with all Mountain Drop-offs transfers to Argentière!

After some internet research I decided on mountain drop-offs as they were the only company who could get me to Geneva for my 7:30am return flight.

On my arrival from London they had a rep to meet us and after a short wait we were transferred to Chamonix in around 1 and a half hrs, great timing given the very snowy conditions. In summary, friendly, efficient service from Geneva to Chamonix. Definitely would recommend them

content-destinations.php
Geneva to Chamonix transfers take just over an hour. So with the mythical Mont Blanc, a wonderful array of ski areas to try and a.. Read More