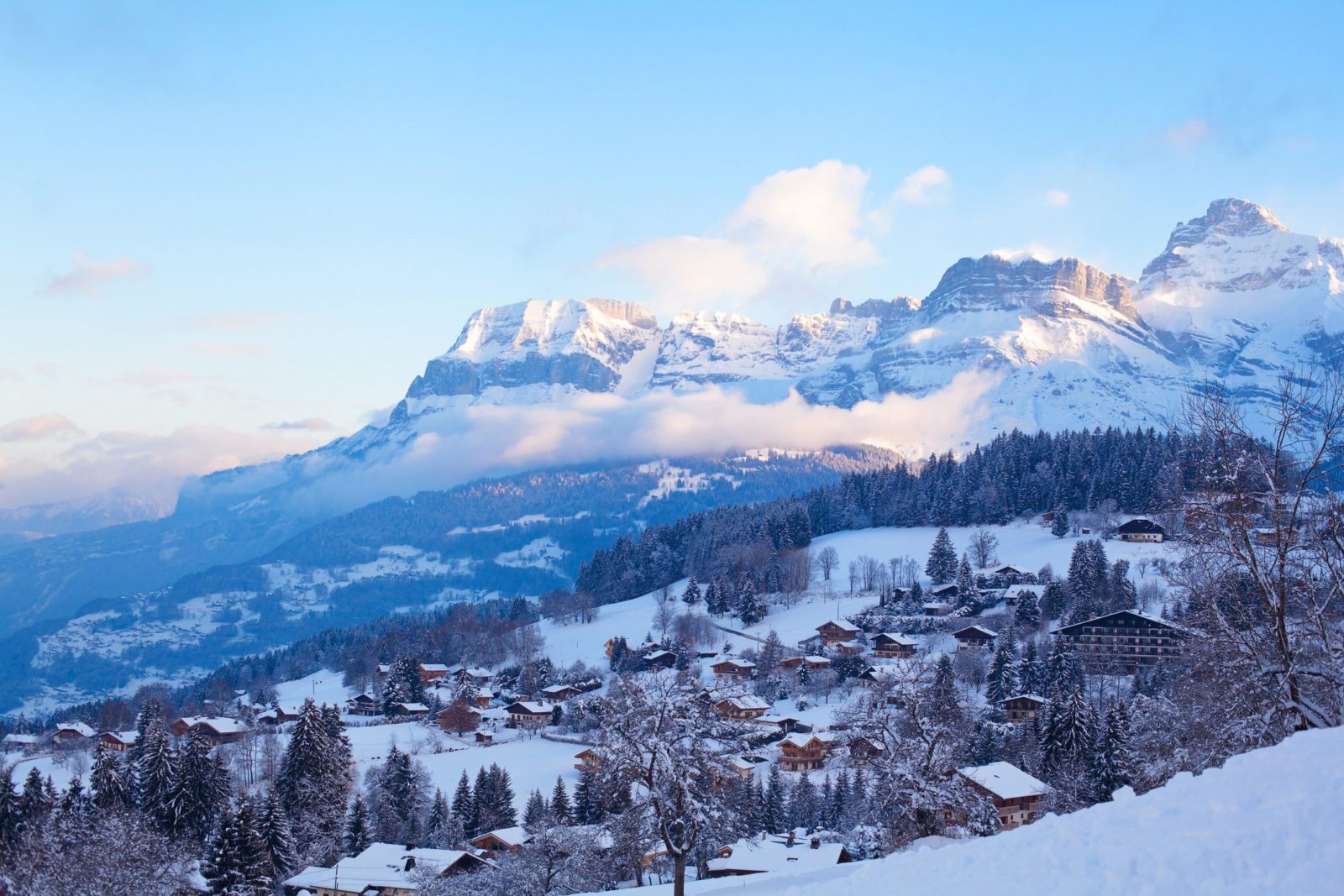 Booking a Mountain Drop-offs transfer from Geneva Airport direct to Combloux will see you arriving at your door of this pretty alpine village in just under an hour.

Combloux may not be one of the ‘big names’ in ski resorts, but this sunny balcony rewards visitors with amazing 360 degree panoramic views that even Victor Hugo declared to be ‘A pearl in the Alps’. Every which way you turn there are mountains.

This family-friendly resort  boasts an privileged elevated position looking out towards the Mont Blanc Massif, the Aravis, the Fiz and the Aiguilles Rouges for very impressive vistas all round. With enjoyable skiing in the sunshine at the heart of the resort, why not come and see for yourself what Combloux has to offer?

Combloux – the enchanting valley of the wolves

The village of Combloux gets its name from ‘La combe des loups’ (the valley of the wolves) and has been an important route for travellers, long before Mountain Drop-offs transfer shuttles could be seen winding their way up to Combloux from Geneva Airport.

The first tourists were (surprise surprise) the Brits, keen to take in the views and the mountain air whilst staying at the Grand Hotel du Mont Blanc, which opened its doors in 1912. These days there are apartments, chalets and hotels for all budgets and we will take you directly to the door.

As a winter resort, Combloux is part of the Portes du Mont Blanc. Combloux, le Jaillet (the slopes on the southern side of Megeve) and La Giettaz (actually over the ‘border’ in Savoie) are all linked by lifts and pistes and then there’s neighbouring Cordon, which is included, but not linked. With one lift pass you can explore more than a 100km of pistes.

And although the skiing locally won’t tire out the very advanced skiers, it’s a great choice for a good value ski holiday, especially for families. Take for example the indoor picnic room at the bottom of the main Beauregard chair at La Cry snow front. Complete with microwave and drinks machines, it means you’re not obliged to buy the most expensive spaghetti bolognaise of your life on the slopes.

Having said that, there are some delightful, family-owned and run mountain restaurants on the slopes of Combloux serving good value tasty food that are sure to tempt you to take a pit stop.

Now you might think that being at just 1183m, Combloux’s La Cry would struggle with snow coverage. But the pistes are on tree-lined prairies, so the resort only needs 30cm-ish of snow to be able to open. And you won’t be taking out big chunks of your skis with rocks – there aren’t any!

The commune has also invested a lot in snow cannons, in order to make sure the liaison pistes linking Combloux to the fellow Portes du Mont Blanc resorts stay open as long as possible.

Despite being a smaller resort, it’s not a case of drag lifts everywhere, as Combloux boasts three chairlifts to get you up the mountain with ease. Unless you’re a confident skier or boarder, we wouldn’t recommend the Bouchet drag from the lower part of the village, it’s better to head straight to La Cry snow front (regular, free ski shuttles take you there) and start your skiing from there.

Kids are well-catered for with the Loupiots creche for babies from three months to six years right on the snow front at La Cry. Also, the Portes du Mont Blanc lift pass is free for under fives. The ski school in Combloux works with the nursery to offer a variety of lesson/creche combinations too.

The hidden gems of Combloux

As well as operating ski transfers from Geneva Airport to Combloux in winter, Mountain Drop-offs offers private transfers to those wanting to explore Combloux in all its summer mountain glory too.

Whilst you will probably discover Combloux for the first time on a winter skiing holiday and you’ll think it’s great, if you come back in the summer you’ll totally fall in love with the place. Here’s our selection of things to do in winter and summer in lovely Combloux – and some of them are quite unusual!

The jewel in Combloux’s summer crown is the Ecological Mountain Lake (the ‘Plan d’eau biotope’ in French). Opened to great success in 2002, this lake was the first biological lake in France. Over 10,000 species of flora and fauna do their natural thing to filter and keep the water clean, aided by a stream, waterfall and water fountain. It’s 100% organic and there are no chemicals used, but the water is of the highest quality for all ages to swim in.

The lake covers 1500m2, with a grassy beach boasting those superb views. Guest numbers are limited to 700 per day and once you’re in you can stay all day. There’s a cafe and restaurant on site and picnics are allowed. Parasols can be hired for a small fee and you can even book swimming lessons for children from the age of five and a half. Entry is around 5€ for adults, 4€ for 6-16 year olds and free for those under six years old.

Discover the story of granite in Combloux. Back in the late 19th and early 20th century, there was an influx of Italian miners to Combloux to work the granite and there’s a 1km signposted walk called ‘Sur les traces de graniteurs’ that tells their story.

These days there are still four stone artisans in Combloux, including Laurenzio Pierre et Fils, who crafts superb gifts out of the local granite – including ‘made in Combloux’ granite drink cooler ‘ice’ cubes! Well worth a visit in winter or summer.

Handiski for wheelchairs users. Combloux is championing access to activities for people with physical disabilities. With blue badge car parking right on the pistes and a piste map that indicates the lifts and pistes accessible to Handiski skiers. More information from ESF Combloux, where there are several qualified instructors to take Handiski lessons.

Stay in a cosy bubble right next to the pistes! These transparent igloo-style bubbles are just a three minute walk from civilisation, but offer a ridiculously romantic setting for stargazing over the Mont Blanc Massif and enjoying those famous Combloux 360 views at night.

This is glamping at its best with all mod cons. Inside your cosy ‘bulle’ as they call them in French, you’ll find a full-size proper king size bed and even your own ensuite shower and dry toilet!

Lift the lid on Combloux’s farming culture. In 1942 there were 134 working farms, today there 26 in amongst the prairies and mountain pastures of Combloux. The tourist office organises ‘gouter’ (teatime) at the farm all year round in both modern and traditional farms.

Some even offer horse and carriage transport there and back, as a change from your journey in a modern Mountain Drop-offs van. You can also visit the farms at milking or cheese-making time by yourself – and you’ll be invited to try the milk, fresh from the cow!

Soft fun by the pistes. If you’re in Combloux in winter with kids, you’ve got to check out the inflatable/soft play wonderland that is ‘L’Igloo de Baloo’ at La Cry. Kids will love sliding, jumping and climbing all over these kid-friendly modules in the snow. In summer the 160m2 fun park moves to the Place du Village, so youngsters can play in the sunshine. What’s more, access in both winter and summer is free.

Combloux certainly boasts an exceptional setting and nothing can beat those 360 degree Mont Blanc views. Whether you’re looking out across green pastures in summer, or snow-covered hills in winter, the panoramic views are pretty impressive from Combloux.

Mountain Drop-offs will take you straight there to experience them for yourself, with private transfers available any time of day or night, any day of the year.

I would just like to say a massive thank you to Mountain Drop offs, couldn’t fault the service, I would definitely recommend and use you again.

content-destinations.php
Megève has all the alpine charm, along with the chic boutiques, Michelin-starred dining and deluxe après-ski too. A traditional luxury resort. More... Read More